If you want to be techinical, Q (the one we see most often, John DeLancie's Q) is worshipped as the "God of Lies" on at least one world, according to Vash from the DS9 Episode Q-Less. He's certainly liked to pass himself off as a deity, like in "Tapestry" where he told a possibly-dead Picard he was god.
In their own way, they are very much like D&D gods. They have distinct personalities, can only be killed by each other (or by mortals on their own plane of existence, the Q-Continuum could be statted up as an Outer Plane they come from), they are fallible, and they can grant powers to mortals if they choose (like they did with Riker in the 1st season), but they don't have to grant powers if they don't want to. They can have children, which grow to adulthood at a prodigious rate (like in Voyager) and have just as many faults and foibles as their parents. They are even bound by shadowy rules (like if Q hates Guinan so much, why didn't he just wipe her out, he acted like he was incapiable, which makes me wonder if she became Divine Rank 0 from entering the Nexus and thus immune to all the divine "you die now" powers, and how the Continuum constantly censures Q for his meddling in our plane)
However, while in many D&D settings gods have to have worshippers to get power, Q don't. They are extradimensional beings who derive almost unlimited power from their extradimensional nature, not from worship or veneration. They usually ignore humanity, or look upon it with a mixture of curiosity and scorn, almost lovecraftian if DeLancie wasn't such a good comic actor with the part.
I would consider them to have a Divine Rank, but not neccesarily just 1 or 2. They would all have the Alter Reality ability (which only requires a Cha of 29). He would probably be at least Rank 6+, since at that point they get Plane Shift at will (thus being able to hop back and forth to the Continuum without being a spellcaster, which Q most certainly isn't) They might all be at least Intermediate Powers (Rank 11+), since they are likely to all have the Rejuvenation special ability.
As a basic Deity write up, I'd give him this (and the domains are largely for the fact that as a deity he can use them himself)
Q
Greater Power (Divine Rank 16)
Alignment: Chaotic Neutral
Portfolio: Trickery, Exploration, Humanity
Domains: Chaos, Trickery, Knowledge, Luck, Travel
Favored Weapon: Unarmed Strike
However, these are all just going for "best fit", Q really is a plot device, and is probably left as such. 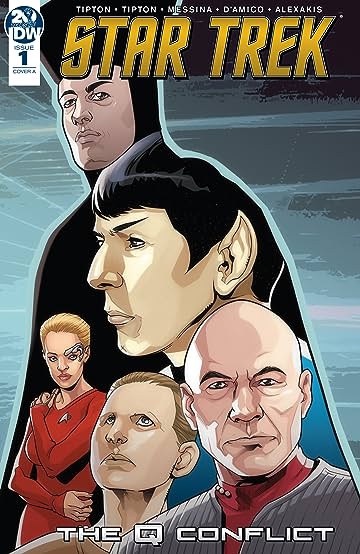